During the World Cup disputed in San Juan, was decided the host country of next B World Cup to happen next year. Once again after 2002 and 2006, Uruguay will receive this competition, and the place will be the Palacio Peñarol in Montevideo.
The date of the competition will be from 22nd until 29th of September.

The number of national teams to participate is not confirmed as always, but everybody hopes to see more than in Dornbirn, last 2010, 11.
Countries like:


First of all the construction of a deadline/schedule to all this national teams is an important step to begin the preparation. Also all Roller Hockey fans would like to see an excellent organization, that will use all the skills available in XXI century to do the best B World Cup ever.
Rolling Now to Prepare the Future!!
Source of news: Diario de Cuyo
Email ThisBlogThis!Share to TwitterShare to FacebookShare to Pinterest
Publiced by Xaral 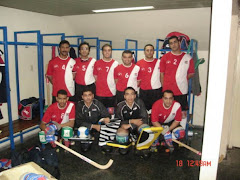